Fortification is the practice of deliberately increasing the content of an essential micronutrient, i.e. vitamins and minerals (including trace elements) in a food, so as to improve the nutritional quality of the food supply and provide a public health benefit with minimal risk to health.

On the 7th October 2003 South Africa made the fortification, with vitamin A, thiamine, riboflavin, niacin, pyridoxine, folic acid, iron and zinc) of certain types of maize meal (four of the now 18 different2 maize products) and wheat flour (excluding3 crushed wheat, pearled wheat, semolina, self-raising flour and flour with an ash content <0.60% db) mandatory following the promulgation4 of R504 Regulations relating to the fortification of certain foodstuffs on April 7th 2003.

In 1994 micronutrient malnutrition was first identified as a critical issue and in August of that year the Minister of Health (Dr Nkosazana C. Dlamini Zuma from 1994 to 1999) appointed the National Committee on Nutrition to develop a nutrition strategy for South Africa. The outcome was an Integrated Nutrition Strategy (INS) that was utilised in the Department of Health’s White Paper for the Transformation of the Health System in South Africa5 in 1997. INS subsequently became the Integrated Nutrition Programme (INP) which identified priority areas as being legislation for salt iodisation and food fortification.

Running concurrently, in 1996, was the National Programme of Action for Children6 (NPA) which included under “Nutrition” (the 1st of seven policy priorities).

INS was based on several scientific studies such as a 1995 report of the South African Vitamin A Consultative Group (SAVACG) which showed 1 in 3 South African children aged 6 – 71 months had marginal Vitamin A status i.e. serum retinol below 20 µg/dl and was further reinforced by a 1997 report “The Nutritional Status of South Africans : A Review of the Literature 1975 – 1996”

This prompted “The National Food Consumption Survey (NFCS): Children aged 1-9 years, South Africa, 1999” a 1203 page document which now appears to have disappeared from the internet though some parts of it remain9 10.

The study indicated that for South African children as a whole, the dietary intake of the following nutrients was less than 67% of the RDA’s for Energy; Calcium; Iron; Zinc; Selenium; Vitamin A; Vitamin D; Vitamin C; Vitamin E; Vitamin B2; Vitamin B3 and Vitamin B6 and that at the national level, the five most commonly eaten foods included maize, white sugar, tea, whole milk and brown bread. With a few exceptions, this pattern, rather than the actual frequency, appears to be fairly consistent in all 9 Provinces.

Guidelines on food fortification with micronutrients Edited by Lindsay Allen, Bruno de Benoist, Omar Dary and Richard Hurrell Published by WHO and FAO

The NFCS 1999 report recommended that maize meal, wheat flour and sugar be fortified at levels designed to achieve 33% of the RDA’s per serving.

The above findings were fed into a process the Department of Health had begun as early as 1996 in which representatives from Government, industry, academia and consumer organisations discussed the feasibility of launching a national staple food fortification programme and what regulatory mechanisms would need to be put in place to make that programme mandatory.

The NFCS, however, restricted itself to children 1 -9 which left a major gap in the Department of Health’s knowledge base. This gap was filled by a “Report11on “South African food consumption studies undertaken amongst different population groups (1983-2000): Average intakes of foods most commonly consumed”.

South Africa, therefore, arrived at a starting point for fortification with a significant amount of evidential support for the programme.

Food fortification is not a “silver bullet” it is a preventative measure and part of a wide reaching strategy to address micronutrient deficiencies in the population which can illustrated as below:

Fortification is recognised however as a very important tool in addressing such deficiencies as evidenced by quotes such as:

As the micronutrients are added to staple foods at the industrial level, have no sensory impact on the foods and the consumer does not have to adjust food preparation methods, make life style changes nor make, often long, trips to the clinic to get supplements such as iron and folic acid that are routinely provided to women of reproductive age.

It has the advantage of being extremely low cost. As a population becomes increasingly under financial pressure the population, especially the poorest of the poor, become increasingly dependent on staple foods so the necessity for fortification actually increases.

Most of the micronutrients added are water soluble so they need to be taken on a frequent basis. Vitamin A and D are exceptions as they are fat soluble and can, therefore, be stored in the body which is one of the reasons they are added at such low concentrations. Of critical importance is the addition of folic acid. Deficiency of the this vitamin can cause a debilitating condition called generically neural tube defects in which the spinal or cereal cortex does not form completely. The formation of the cortex occurs in the 1st trimester (3 months) which is generally before the women is even aware she is pregnant. No amount of supplemental folic acid is going to undo that damage. Similarly if a child has severe vitamin A deficiency it can lead to blindness. It remains the single greatest preventable cause of childhood blindness and every year between 250,000 and 500,000 pre-school children worldwide go blind from vitamin A deficiency and about half of them die within a year.

Food fortification is also not new. It has been around for circa 90 years and globally 85 countries have legislation to mandate fortification of at least one industrially milled cereal grain.

The countries 12 with legislation to fortify at least one grain are blue on the map left. 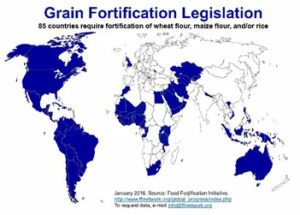 These maps show cereals but other food vehicles such as salt which is nearing universal salt iodisation (small, scale salt production being a major constraint), fats and oil, dairy products and sugar are also fortified if local consumption indicates it could be advantageous. A guiding principle of fortification is that it must be widely consumed on a fairly regular basis so a countries food consumption pattern dictates the food vehicles used.

The table below gives an indication of a micronutrients impact and foods considered rich in that nutrient:

Missing from the list above is vitamin B12 which is required in very small amounts and acts synergistically with other vitamins – of particular significance is it role with folic acid. Most importantly vitamin B12 is only found in foods of animal origin i.e. meat, eggs, milk etc.

On the 3rd March the Government Gazette14 39776 published for comment (within 3 months of publication) a totally revised food fortification regulation based on the latest scientific evidence, published by WHO15, regarding level of addition of micronutrients to wheat flour and maize meal according to national average consumption levels.

This has followed the same type of extensive discussions carried in 1996 (mentioned earlier) and has revised the fortification micronutrient mix in 3 key micronutrient areas – changed the iron source to one more bio available, increased the zinc level and adding vitamin B12 – having conducted sensory trials to ensure no adverse effects. Additionally the new regulations now require cake flour to be fortified after it was noticed that the consumption of cake flour had increased significantly and was being widely consumed at village level as homemade bread. A further addition was the development of a specific maize meal that is highly fortified and targeted at children aged 1 to 5 years who have small stomachs and, therefore, cannot eat enough of the normal fortified maize meal to reach their desired nutrient intake.

As with the previous regulations fortified wheat flour and maize meal will be identified by a logo printed in a single colour or a multiple colour version (this would be too expensive for normal packaging but could be used in promotional pamphlets etc.

For the highly fortified maize meal the following logo has been selected. 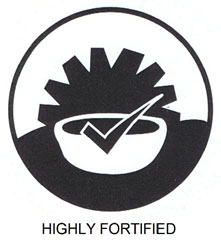 For additional information the following references are recommended: