The term dioxin usually refers to a group of persistent organic pollutants that share a similar chemical structure (polychlorinated dibenzodioxins (PCDDs). The word dioxin formally refers to the central dioxygenated ring (Figure 1), which is stabilised by the two flanking benzene rings (Figure 2). Polychlorinated dibenzofurans (PCDFs) and polychlorinated biphenyls (PCBs) (Figures 3 and 4) are often called ‘dioxin-like’ as they behave in a similar way and are often included in the same set of safety limits (1). 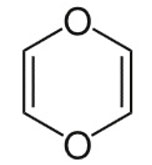 Nowadays dioxins are not manufactured intentionally, but are formed as by-products of ordinary human activities: such as metal smelting, the manufacture of herbicides and pesticides and in the bleaching of paper , and also in combustion processes such as commercial or municipal waste incineration, burning of chlorine-containing substances such as polyvinyl chloride (PVC) and fuels such as wood, coal, diesel or oil, and even household fires. Dioxins can also be formed as a result of natural processes such as forest fires and volcanic eruptions. Cigarette smoke contains small amounts of dioxins. The uncontrolled burning of residential waste is thought to be a major source of dioxins to the environment.

PCBs are not natural substances but were widely manufactured and used in the past. Once it was realised that they had harmful side effects, the manufacture of PCB’s was prohibited (under the Stockholm Convention on Persistant Organic Pollutants), but unfortunately there are still significant amounts that still get released into the environment.

Should we be concerned about Dioxins?

The main concern with dioxins is that they accumulate in fatty tissue in the body and are very persistent. Exposure to very low levels of dioxins (parts per trillion) over long periods can contribute to reproductive and developmental problems and damage the immune system of humans and animals. They are thought to interfere with hormones and also cause cancer. Exposure to high levels of dioxins results in a skin disease called chloracne; a condition where acne-like lesions occur mainly on the face and upper body. Other effects of exposure to large amounts of dioxins include skin rashes, skin discoloration, excessive body hair, and mild liver damage.

When released into the air, dioxins may be transported long distances and eventually settle in minute amounts on plants, where they are taken up by animals. When dioxins are released into water, they tend to settle into sediments. Here they can be ingested by fish and other aquatic organisms. Dioxins are extremely persistent and decompose very slowly in the environment. They become concentrated in the food chain so that animals have higher concentrations than plants, water, soil, or sediments. Within animals, dioxins tend to accumulate in fat.

Foods high in animal fat, such as milk, meat, fish and eggs (and foods that use these as ingredients) are the main source of dioxins for humans where are stored in fatty tissues and are neither metabolised nor excreted.

There are several hundred different compounds that are dioxins or dioxin-like. Only a few of them are toxic and of those that are, not all have the same degree of toxicity. Dioxins are most often found in mixtures rather than as single compounds in the environment. The most toxic dioxin is 2,3,7,8-tetrachlorodibenzo-p-dioxin (TCDD). A method has been established for comparing the toxicity of different types of dioxins to the toxicity of TCDD. These toxicity-weighted concentrations are then summed to give a single value, which is expressed as a Toxic Equivalent (TEQ). The system of Toxic Equivalency Factors (TEFs) that is used by a number of countries is that set by the World Health Organization (WHO), and the resulting overall concentrations are referred to as WHO-TEQs.

The limits for dioxins in foods

In 2001, the Joint Food and Agriculture Organization of the United Nations (FAO)/WHO Expert Committee on Food Additives (JECFA) performed an updated comprehensive risk assessment of PCDDs, PCDFs, and “dioxin-like” PCBs. The experts established a provisional tolerable monthly intake (PTMI) of 70 picogram/kg per month. This level is the amount of dioxins that can be ingested over lifetime without detectable health effects.1

In December 2006, maximum limits for dioxins were set by the European Commission in Commission Regulation (EC) No 1881/2006 for maximum levels for certain contaminants in foodstuffs.

This document is available on-line at www.eur-lex.europa.eu.

Low levels of dioxins are believed to exist ubiquitously. As a result of the low water solubility, elimination of dioxins in humans and animals is very slow, as the kidneys are not able to secrete them in urine. Metabolism in humans is extremely slow and this results in biological half-lives of several years for all dioxins.  The best way to ensure that we do not consume amounts that will be detrimental to our health is by reducing the amount in the environment. In most countries there is now strict control of industrial processes to reduce formation of dioxins as far as possible. The Codex Alimentarius Commission adopted a Code of Practice for Source Directed Measures to Reduce Contamination of Foods with Chemicals (CAC/RCP 49-2001) in 2001. In 2006 a Code of Practice for the Prevention and Reduction of Dioxin and Dioxin-like PCB Contamination in Food and Feeds (CAC/RCP 62-2006) was adopted.

Although dioxins are environmental contaminants, most dioxin exposure occurs through diet, with over 95% coming through ingestion of animal fats. A long-term strategy to reduce the body’s burden includes trimming fat from meat, consuming low-fat dairy products and ensuring a balanced diet that includes adequate intake of fruits, vegetables and cereals. This will help to avoid excessive exposure to one of the sources of dioxins.

There have been and are still ongoing extensive studies of the amounts of dioxin and related substances in the environment, in our food and in humans. The good news is that the levels have been monitored, they have been shown to have dropped significantly over the past two to three decades (2, 3). In the United States of America, the current quantifiable levels have been reduced by more than 90% since 1987. In the United Kingdom, where intake has been measured since 1982, intake has been reduced by 85%.