What Is Fluoride And Why Is It Good For My Teeth?

“Fluoride” is a compound of the element fluorine, which is found universally throughout nature in water, soil, air and in most foods. Fluoride exists abundantly in living tissue as an ion, and is absorbed easily into tooth enamel, especially in children’s growing teeth. Once teeth are developed, fluoride makes the entire tooth structure more resistant to decay and promotes remineralization, which aids in repairing early decay before any damage is even visible.

Can Fluoride Affect My Health Negatively?

At low concentrations, Fluoride can be extremely beneficial, but it has a narrow margin of safety, and is detrimental to health at higher concentrations. This applies not only to human beings but also to animals and aquatic creatures. The beneficial concentration in water for humans is 0.7 to 1 milligram F- per liter or parts per million (mg/l or ppm) and 0.7 to 1.5 mg/l or ppm for animals.

Detrimental levels for humans start at 1.5 mg/l F- in drinking water When this amount is consumed over a long period of time (i.e. longer that a year), it will result in tooth staining. Damage to teeth and skeleton occurs at around 3 mg/l of F- according to the World Health Organisation. Death from acute fluoride poisoning may occur if the concentration of F- exceeds 100 mg/l. (Graphic from S J Bramhall (Dr. Chetan))

Dental fluorosis is the most common harmful effect of fluoride, and occurs during the early development of teeth. It is usually complete by the end of a child’s fifth year and results in the discoloring of teeth. Once enamel has finished developing, dental fluorosis cannot occur and it has been concluded that fluorosis is no more than a cosmetic effect. In a mild case, fluorosis is hardly detectable and appears as slight white patches on the teeth. In a severe case, fluorosis causes mottling of the teeth, leaving permanent dark patches on teeth. 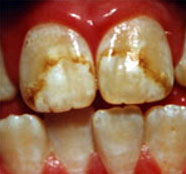 Fluoridation is the process of adding fluoride to the water supply of a community, to reach optimum fluoride concentration of 0.7 mg/l, in order to preserve the teeth of the inhabitants. Tooth enamel ordinarily contains small amounts of fluorides and when the amount is augmented through the intake of fluoridated water, especially during the first eight years of childhood, tooth decay can be greatly reduced.

The Department of Health has legislated that water service providers are obliged to fluoridate water to a concentration level of up to 0,7 mg F-/l as of September 2003. As at 2006, according to the Client Care Service of the Rand Water, this has not yet been implemented and they do not fluoridate water, nor does any other water utility in South Africa. According to the Department of Health, the National Fluoridation Committee are currently (2006) adapting the old, and drafting some new regulations in terms of the new National Health Act. On completion of this process, the regulations will be published for commentary, after which they will be proposed to the Minister of Health, for promulgation.

What Is The Rand Water’s Stance On Fluoridation?

Rand Water acknowledge the advantages of fluoride supplementation and do not wish to challenge the rationale for augmenting diets with fluoride. They will abide by regulations regarding fluoridation, however, they do express major concerns with the decision to fluoridate potable water. According to them the social and financial viability of fluoridating potable water supplies requires further consideration. It is therefore proposed by them that government reconsider the matter of fluoridating potable water supplies and that other options are investigated.

Rand water expressed the following concerns and recommendations on fluoridation:

Fluoride has proved to be a natural component with the remarkable ability to protect people of all ages against tooth decay. It has been incorporated into toothpastes, mouthwashes, supplemental fluoride tablets, and for more than 60 years to drinking water globally. However, together with positive results, Fluoride has had its share of criticism. It has been blamed for everything from cancer to kidney problems. However, according to the South African Dental Association there is no scientific proof for any of the abovementioned when fluoride is taken in at the correct small quantities to prevent tooth decay. In large uncontrolled amounts, it can be detrimental to health, but the public needs to differentiate between facts and propaganda since most of the statements made by those being opposed to the use of fluoride cannot be verified by controlled, scientific research.

One of the reasons that several thousand references on the study fluoride and the effect thereof on human health exist, is that over the years, people have made disturbing claims about fluoridation, none of which have been shown to be true. This has even been tested in courts of law: After one of the longest civil court cases in British history, the judge concluded that fluoridation was both beneficial and safe. The American courts, as well as the British courts, have ruled also that fluoridation does not impinge on any fundamental right.

The World Health Organization (WHO) made the following statement on Fluoridation:

More than 60 major international health organisations throughout the world support water fluoridation, including the:

There is no doubt about the depth of professional and scientific support for fluoridation in South Africa. It is endorsed by the most authoritative dental and medical organisations including the:

The Ethics Of Water Fluoridation

Some opponents of fluoridation argue against it on the grounds that it is unethical. Do they have a point, or are they simply being emotionally up roused? John Harris, Professor of Applied Philosophy at the Centre for Social Ethics and Policy of the University of Manchester sees no dilemma about fluoridation. It is, he argues, perfectly ethical because:

What About An Alternative For Water Fluoridation?

Fluoride toothpaste is used all over the world, but for people with a lower socio economic status, the relatively high cost means it is difficult to afford, and so it might not be used. A programme of subsidisation will be required to improve the availability of fluoride toothpastes to those communities most in need. Cost-saving measures such as the removal of VAT might even need to be considered. The effectiveness of fluoridated salt is about the same as that of water, but only when appropriate amounts are used. After appropriate studies are carried out on patterns of salt intake, fluoridation might be considered.

Fluoride can be applied topically to teeth by oral health professionals. Fluoride rinses, drops and tablets are also available. These forms of fluoride supplementation do however not guarantee a consistent intake and are much more expensive than water fluoridation. The greatest reductions in tooth decay have been shown where water fluoridation is available in addition to topical fluorides, toothpaste, and fluoride rinses. The question is also raised whether alternative methods of fluoride augmentation such as supplementing milk, sugar, or maize meal have been thoroughly investigated. These may also have a good chance of reaching the target population, especially if fluoridated foods are subsidised such that it is cheaper than non-fluoridated foods.

Sorting Out The Facts From Propaganda

Throughout the world, the US National Cancer Institute, the Royal Statistical Society, Oxford University, the US Centers for Disease Control and Prevention, the National Heart, Lung and Blood Institute and the Royal College of Physicians have all refuted unanimously the claim that fluoride causes cancer. In South Africa the Cancer Association of South Africa and the South African Society for Medical Oncology support water fluoridation.

References:
http://www.randwater.co.za/CorporateResponsibility/WWE/Pages/WaterFlouridation.aspx (Nov. 2014) SJ Bramhall.
The Fight Against Fluoride: One We Can Win. OpEdNews.com http://www.opednews.com/articles/2/The-Fight-Against-Fluoride-by-Dr-Stuart-Jeanne-B-110903-421.html (Nov. 2014)